Description: Eastern populations have a yellow spot behind their eye which is the most recognizable characteristic for identification in the field; juvenile turtles have vivid yellow markings. Vertical yellow bands streak the carapace (top of shell), while the plastron (bottom of shell) is primarily yellow. Older turtles tend to lose these patterns and become darker and more difficult to identify. Sliders are also distinguishable from other turtles by their rounded lower jaw; all other groups of turtles have flat jaws. In addition, sliders are often more highly domed than cooters. Sliders range from 5 to 12 inches (12.5-30.5 cm) in carapace length.

Activity/Behavior: This species is one of the most conspicuous basking turtles throughout its range. They are wary baskers and slide into the water whenever disturbed. These turtles are sometimes found on land, and females are most frequently encountered in spring while they are searching for a nesting site.

Habitat/Range: Sliders are not very particular about the aquatic habitats they occupy, but prefer rivers, ditches, lakes, and ponds.

Reproduction: Nesting occurs in late spring or early summer near water. Nests usually contain 4 to 12 eggs, and some hatchlings will overwinter in their nests.

Miscellaneous: Another sub-species, the red-eared slider, is a common aquarium pet. They have been released and become established in areas outside their native range, where they often out compete native turtle species.

The shaded region represents the range of the yellow-bellied slider in North Carolina. 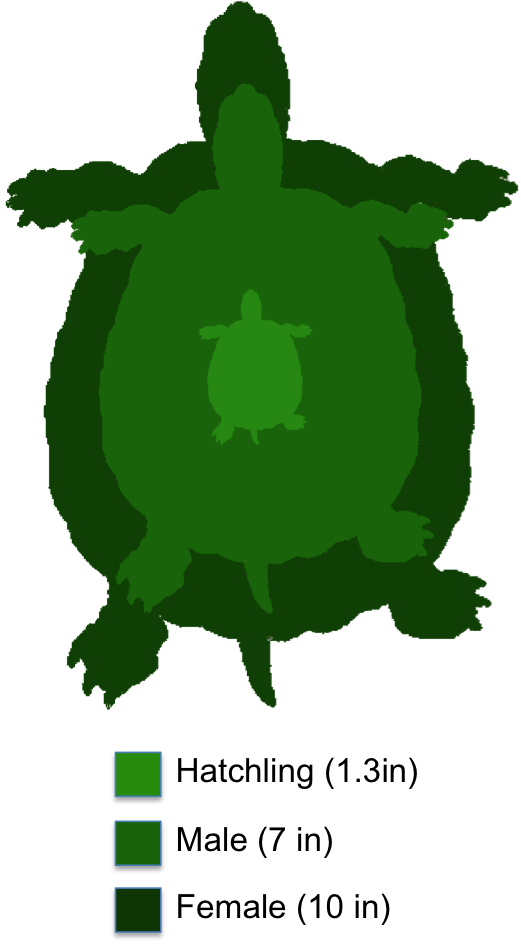