Description: A small turtle that, in most of its range, has three light stripes down the length of its shell. In North Carolina, these stripes are absent.  They can be difficult to distinguish from eastern mud turtles, but they typically have light stripes from their eyes to the tips of their noses. The carapace (top of shell) is smooth, domed and usually dark brown in coloration. Males can be distinguished from females by their longer, thicker tails. Adults have a carapace length between 3 and 4 inches (7.5-10 cm).

Feeding/Diet: Their diet is similar to that of the eastern mud turtle. This is an omnivorous species which feeds primarily on aquatic invertebrates.

Activity/Behavior: Striped mud turtles are semi-aquatic, but spend large parts of the year buried beneath soil and ground litter. They rarely bask out of the water.

Habitat/Range: Habitat is varied and includes swamps, drainage canals, ponds, wetlands, streams and temporary pools. They are generally not found in moving water.

Reproduction: Females lay approximately 4 eggs during early summer. Little is known about the reproductive biology of this species in North Carolina.

Miscellaneous: Until the 1980’s all mud turtles north of Florida were thought to be eastern mud turtles. Since then, this species has been verified as far north as Virginia. There is a report of a striped mud turtle living nearly 50 years in captivity.

The shaded region represents the range of the striped mud turtle in North Carolina. 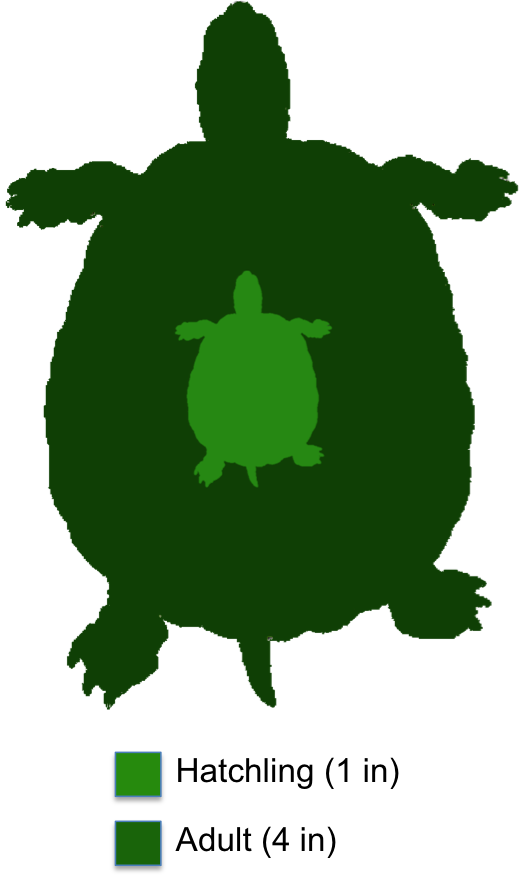