Description: The spotted turtle has a dark, nearly black, shell and body covered with small yellow spots. The benefit of having spots is unknown as some adults may have only a few spots and some have over one-hundred. The hingeless plastron is yellowish to pinkish and covered with large brown/black blotches. Adults range from 3.5 to 4.5 inches (9-11.5 cm ) in carapace length.

Feeding/Diet: Spotted turtles are omnivorous. They feed primarily on aquatic vegetation and invertebrates, but will also eat invertebrates. This species has been known to eat carrion.

Activity/Behavior: This is a shy species that spends much of its time hiding under aquatic vegetation, and is quick to flee if disturbed. While they spend most of their time in the water, spotted turtles can be encountered in nearby terrestrial habitats and are frequently killed by motor vehicles when crossing roads. They are most easily observed in the spring when they spend more time basking in the sun.

Reproduction: Male spotted turtles will sometimes show aggression towards one another during the breeding season (spring). Eggs are laid in early summer and incubation lasts for 70 to 83 days. Young may overwinter in the nest before emerging the following spring.

Miscellaneous: The spotted turtle is listed as a threatened species by the World Conservation Union. Over collection for the pet trade may be a major threat to this species in some places.

The shaded region represents the range of the spotted turtle in North Carolina. 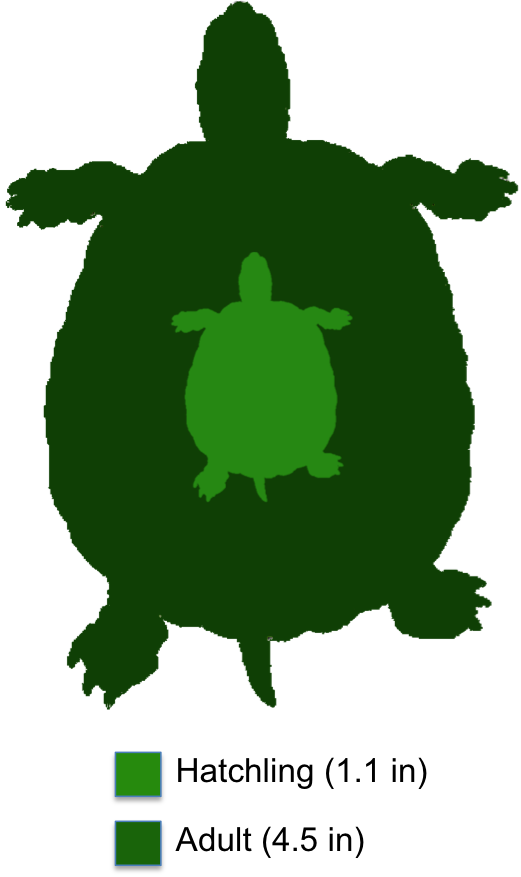