Description: A large turtle often found in rivers. Distinguishing this species from the closely related Florida cooter (Pseudemys floridana) and redbelly turtle (Pseudemys rubriventris), as well as the yellowbelly slider (Trachemys scripta) can be difficult. On younger river cooters concentric markings on its shell are usually visible, with a characteristic “C” on the second side scute. However, this is often not visible on older individuals. This turtle can be distinguished from the slider by its significantly more flattened and flared shell and by its flat chin (rounded in sliders). Also, the plastron (bottom of shell) is usually heavily marked with black and yellow, and head markings are usually less prominent than in the slider. Florida cooters lack “C” shaped markings, and redbelly turtles have reddish or orange underside and reddish ventricle bars on the carapace. Adults are between 9 and 13 inches (23-33 cm) in carapace length.

Feeding/Diet: River cooters are herbivorous and feed upon aquatic plants.

Activity/Behavior: River cooters are conspicuous basking turtles. They bask on exposed logs and rocks, and quickly enter the water when approached.

Habitat/Range: River cooters are found in rivers and large streams. Distinguishing the river cooter from the other two species of Pseudemys is often best done based upon habitat. Florida cooters usually inhabit wetlands, marshes, ponds, and other still water bodies. In North Carolina, Redbelly turtles are restricted to coastal areas.

Miscellaneous: In eastern North Carolina, river cooters have been known to hybridize with Florida cooters.

The shaded region represents the range of the river cooter in North Carolina. 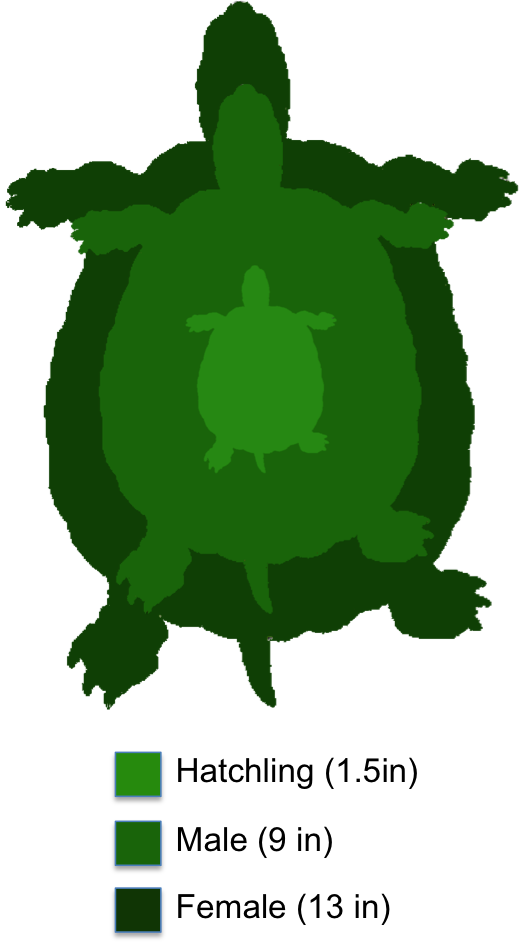