Description: Common musk turtles (or stinkpots) have small plastrons (bottom of shell) with a single hinge that provides little to no protection for their legs, distinguishing them from the similar mud turtles. Musk turtles have two light stripes on their heads, distinguishing them from stripe-necked musk turtles and young snapping turtles. Their carapace (top of shell) is often smooth and has a ridge down the center. It is usually black in color and sometimes covered with spots or streaks. Males can be distinguished from females by their thick tail, which is sharp and horny. Female tails are much smaller and lack the sharp point. This species ranges from 2 to 4.5 inches (5.1-11.5 cm) in carapace length.

Activity/Behavior: This species is mostly aquatic and usually not found far from water. They are most often seen walking or swimming along the bottom in shallow water. They are active during both day and night. Musk turtles have been found basking more than 7 feet (~ 2 m) above the water on tree limbs. This species will frequently bite when first captured and will release a smelly musk, which gives the species its name.

Habitat/Range: Common musk turtles are abundant in many waterways, but prefer still or slow-moving bodies of water with soft bottoms. Unlike mud turtles, this species is intolerant of brackish water and spends the winter buried in the mud.

Reproduction: Females lay between 2 and 8 eggs in late spring and summer, usually in rotten logs or piles of dead vegetation.

The shaded region represents the range of the common musk turtle in North Carolina. 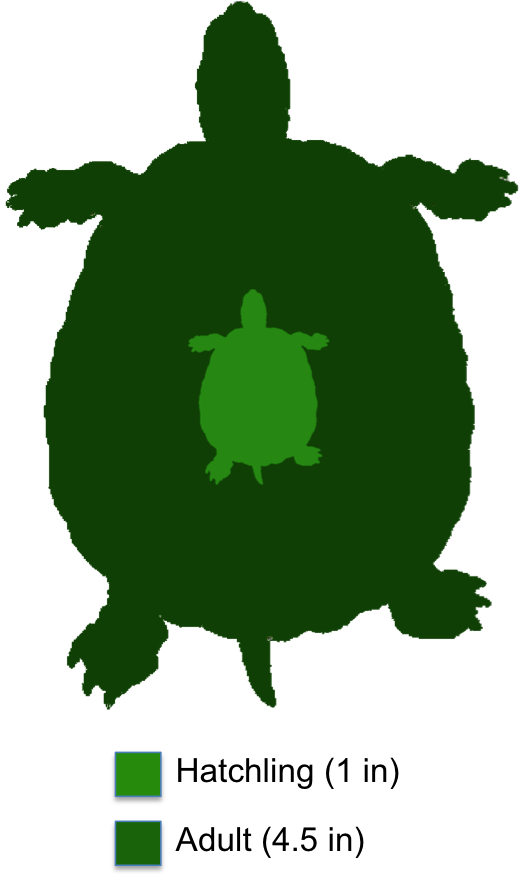