Description: The green frog is also commonly known as the “bronze frog” because it is often a bronze color. This common frog closely resembles the bullfrog but may be distinguished by the presence of a distinct ridge or fold of skin — called a dorsolateral fold — on either side of its body. The green frog is more often brown or bronze than green, but some bright green is often present around the face and lips. Its belly is white, usually with at least some dark spots or mottling. Two similar and weakly defined subspecies occur in North Carolina — the northern green frog (Rana clamitans melanota) in the Mountains, Piedmont and northern Coastal Plain and the bronze frog (Rana clamitans clamitans) in the southeastern Coastal Plain.

Habitats and Habits: Green frogs are smaller than bullfrogs, but their habitats and habits are similar. They are found throughout the state with the exception of some barrier islands. Eggs are deposited as a surface mass. The tadpoles resemble those of the bullfrog but are smaller, often having a lower tail fin and lacking distinct black dots. Tadpoles may take up to a year to transform.

Call: Green frogs breed in spring and summer — usually from April to August. Their call is an abrupt “c’tunk,” often compared to the sound of plucking a loose banjo string. An abrupt “eeek!” may also be given as an “alarm call” by startled individuals as they leap into the water.

Frog Fact: Following metamorphosis, juvenile green frogs often disperse from their natal ponds to neighboring ponds. Movements of up to three miles have been documented.

The shaded region represents the range of the Green Frog in North Carolina. 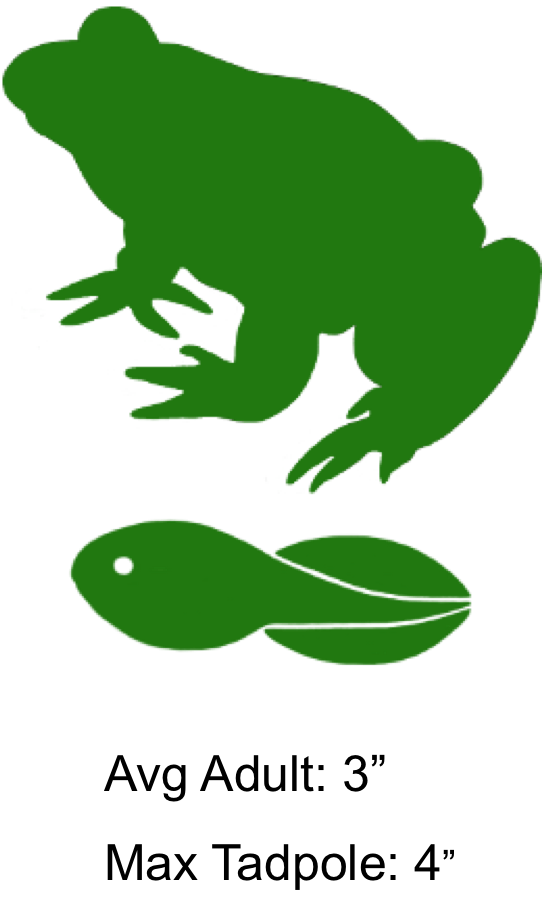