Description: This largest of North American frogs is perhaps our most familiar amphibian. The bullfrog is usually some shade of brown or green, frequently with obscure dark blotches and often with bright green around the face. Its belly is whitish with dark mottling. The lack of ridges running along the sides of its body distinguishes it from most of our other “true frogs.”

Habitats and Habits: Highly adaptable, bullfrogs occur throughout North Carolina with the exception of some barrier islands. They have been widely introduced in the western United States and parts of Europe, where they have become serious pests, threatening native frogs and other native species through predation or competition. In North Carolina, however, bullfrogs are native and play important ecological roles. Like most frogs, bullfrogs are opportunistic feeders, eating virtually any moving prey large enough to be noticed and small enough to be swallowed. Large prey items include other frogs, fishes, reptiles and even birds and mammals.

Bullfrogs breed in spring and summer, using virtually any permanent or semipermanent body of water. They are our most prolific amphibians. Females may lay up to 12,000 eggs, deposited as a surface mass. The tadpoles may grow to nearly 6 inches in length and usually take at least a year — sometimes two — to transform. Larger tadpoles are easily identified by the presence of tiny, distinct black dots scattered on their bodies and tails. Juvenile bullfrogs often disperse into small pools, ditches or other bodies of water to live and grow until they reach adult size before moving back to more permanent bodies of water where they can establish territories.

Call: Their call, a familiar, booming “roo-roo-room,” or “jug-o-rum,” is heard most often from April through August. Startled individuals may also voice a shrieking “alarm call” as they leap into the water, and males defending territories against other males may utter an abrupt, spitting “phfoot!” as an “aggression call.”

Frog Fact: Because bullfrog tadpoles are apparently toxic or distasteful to fish and some other predators, they often thrive in permanent water where fish are present.

The shaded region represents the range of the American Bullfrog in North Carolina. 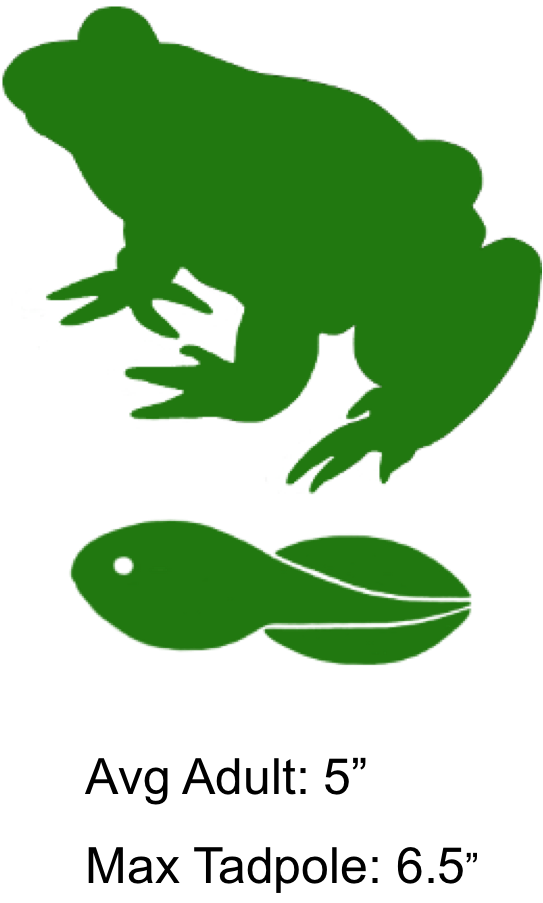